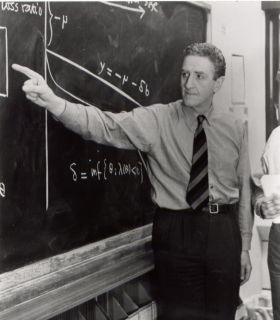 John Trevor Lewis, a mathematical physicist of considerable international
repute, died on 21 January, aged 71. He was Principal Investigator at
the Communications Network Research Institute in DIT, Founder and
Chief Scientist of Corvil Ltd., and former Director of the School of
Theoretical Physics in DIAS. In the words of an old Oxford colleague,
"John was a lovely man and a perfect fit to my ideal of an academic:
a man of great learning, lightly worn, and no conceit of himself."

John was born in Swansea, Wales, on 15 April 1932 to Tegwyn and Trevor,
a ship broker. He was educated at Cardiff High School and, when the family
moved to Belfast after the Second World War, the Royal Belfast
Academical Institution. He studied in Queen's University Belfast where he
met Maureen MacEntee, an organic chemist. They were married in September
1959 and have four children, of whom he often spoke with quiet pride.
In 1955, he was awarded his doctorate in applied mathematics by Queen's.
He became a Research Lecturer at Christ Church, Oxford in 1956 and a
Tutorial Fellow in Mathematics in Brasenose College in 1959. He was
appointed to a University Lectureship at the Mathematical Institute
Oxford in 1965. While at Oxford he supervised fifteen successful
doctorate candidates, many of whom have become renowned academics in
their own right.

John came to Dublin in 1972 to take up a Senior Professorship in the
School of Theoretical Physics of the Dublin Institute for Advanced
Studies (DIAS), and served as Director of the School from 1975 until his
retirement in 2001. It was characteristic of John's generosity that one
of his first acts as Director in DIAS was to introduce an open access
policy to its facilities, enabling scientists from all over Dublin to further their research.

His doctoral thesis introduced the widely known Dalgarno-Lewis method
in quantum mechanics, which appears in most standard texts. In 1969,
John spent a year at the Institute for Advanced Study in Princeton, New
Jersey, and Rockefellar University, New York. His interaction there with
the late Prof. Mark Kac strongly influenced his research interests, and
led to a paper with Prof. Brian Davies on generalized quantum measurement,
still widely referenced today. Kac introduced him to two topics, namely
dissipation in quantum mechanics and Bose-Einstein condensation, which
were to prove central to John's career. At Rockefellar, he established
a long-term collaboration with Profs. Bill Ford and Bob O'Connell on
the quantum Langevin equation. He continued his work on Bose-Einstein
phase-transitions in Dublin with Dr. Joe Pule and others. Their work
took a crucial turn in 1984 with the discovery of the power of Large
Deviation Theory in calculating properties of interacting boson gases.
With Prof. Charles Pfister and Dr. Wayne Sullivan, he used Large
Deviations to give a proof of the equivalence of ensembles.

In 1988, having reversed a Government decision to close DIAS, John set
about broadening the scope of its research. On visits to Moscow, John
met leading researchers in the Institute for Problems in Information
Transmission. They supported their research in pure mathematics with
applications to telecommunications. Inspired by this, he launched a
programme investigating the applications of Large Deviation Theory to
the Internet. After a revolutionary insight on how to measure Internet
traffic, John persuaded visionaries from the Computer Laboratory in
Cambridge and the Swedish operator Telia to join him in a three-year
research contract funded by the European Commission. Starting in
1996, the project supported nearly a dozen students in pursuit of
higher degrees in mathematics. After its successful conclusion,
John led several of the researchers in commercialising the research.
The thriving company he founded, Corvil Ltd., was recognised this year
as a Technology Pioneer by the World Economic Forum. John also sought to
complement his commercial success in networks with fundamental research.
John bid successfully for a prestigious Principal Investigator award
from Science Foundation Ireland and in 2001 he and his team established
the Communication Networks Research Institute (CNRI) in DIT.

John was a gifted teacher with a rare ability to present clearly the
essential principles of a difficult subject without compromising its
complexity. In Dublin, although his position was free of teaching
duties, his passion for teaching mathematics led him to offer his
talents to the School of Mathematics in Trinity College. For 24 years,
he taught statistical mechanics and probability theory to undergraduates.
He constantly refined his lectures, striving to present the latest
insights from his research. John took his responsibilities as a
physicist seriously and, in 1971, helped found the Irish branch of the
Pugwash Conferences on Science and World Affairs. Pugwash shared the
1995 Nobel Peace Prize with its president, Joseph Rotblat. John was
elected president of the Irish Federation of University Teachers (IFUT)
just before the Government announced its 1987 decision to close Carysfort
Training College. John rose to the challenge and heartened IFUT members
with rousing speeches while tirelessly engaging with the government to
find a solution, in which he succeeded.

It is a measure of the respect that John commanded that universities and
governmental bodies in different countries sought his guidance on research
standards and policies. His close relationship with Trinity was marked
by an Honorary Professorship and Patronship of the Hamilton Mathematics
Institute. He also held Honorary Professorships at the Universities
of Swansea and Cardiff. John was very pleased to accept many awards,
including the Senior Vice-Presidency of the Royal Irish Academy in 1998,
and one of the first honorary doctorates from DIT in 1999.

A keen sportsman throughout his life, he captained Queen's University
boat club, with whom he won the national senior championship for eights
in 1953. He later rowed for Christ Church, Oxford reaching the final of
the Ladies Plate at Henley Royal Regatta in 1957. He kept up his interest
in rowing as a spectator and attended Henley in 2003, where his son Ciaran
was a medal winner. He was a keen reader of biographies, enjoyed good
wine, and he and Maureen spent many holidays visiting vineyards.

John Lewis is survived by his wife Maureen, children Caitriona, Michael,
Roisin and Ciaran, brother Arthur and five grandchildren. Their loss
is shared, in some small measure, by John's many friends, colleagues
and students.